Baltensperger + Siepert, 2018
a manifestation of a sense of community and belonging through a common effort

How is it possible to feel connected in a time in which we all try to live our individuality? How can we feel connected when we are living our lives along side each other without being involved in a deeper way?

Watching Andrei Tarkowski’s movie Andrey Rubljow, we were inspired by the finishing scene of the movie. Playing in the in the Russia of the Middle Ages, after times of war and chaos, a city was rebuilt. Therefore a new bell had to be casted. This almost impossible act of casting a bell in which all inhabitants of the city where involved, succeed and marked a turning point for the city and symbolizes a new beginning.

Asked to do an artwork for a new neighborhood in Zurich, we proposed to recreate this moment, to cast a large bell on site in this neighborhood. With „The Bell“ we set out to create a moment in which we manifest a sense of community and belonging through a common effort.

Over a period of 3 months people where invited to collect and donate aluminium and to for the casting of the bell. Together withs the help of roughy 1200 residents we needed to collect enough metal. Only then the bell could be casted. 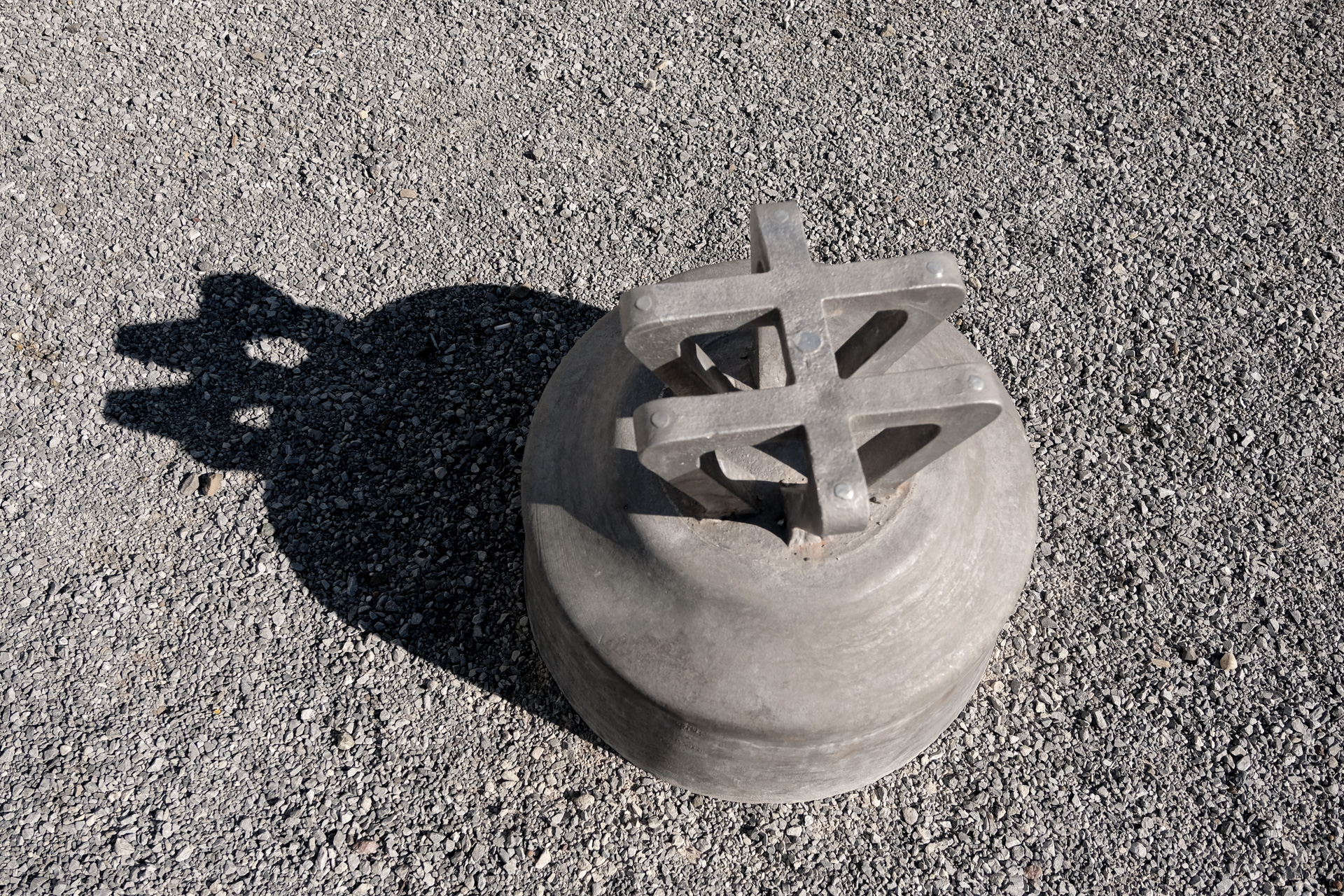 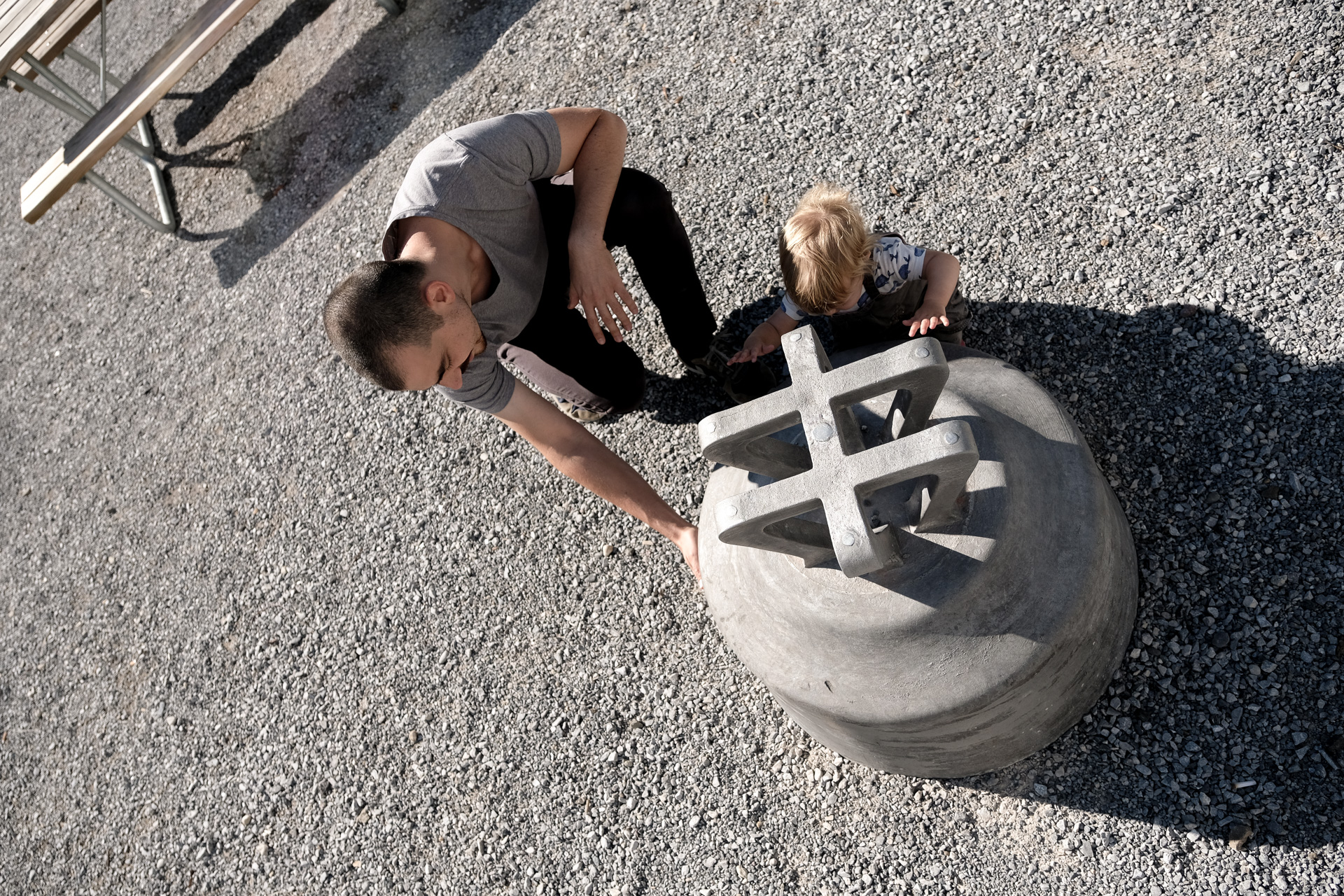 This June, the barbecue area on the Hunziker site in Zurich, serves as a temporary aluminium collection point. At first glance, this installation looks more like an educational project about sustainable handling of raw materials and seems to have little in common with an artwork. The artistic concept behind it does not take on a form until the exhibition New North Zurich is underway. The Zurich-based artists Stefan Baltensperger (b. 1976 in Switzerland) and David Siepert (b. 1983 in Germany) have invited the public to contribute scrap aluminium for the casting of a bell and thus to participate in the production of the artwork by handing in personal items. Once the donated material has spent several weeks amassing in collection containers, a bell is subsequently cast directly in the ground at the same place– and shall remain there. After this act, only the uppermost part, comprising the neck and crown, is to protrude out of the earth like a waist-high bollard, resembling an archaeological relic.

The art projects undertaken by Baltensperger + Siepert are always preceded by a superordinate process. The focus is not on the artwork, but on discourse and activity, so the art’s reach, as intended by the artists, is inevitably to be de ned more broadly. The artistic processes are not only meant to offer an analytical perspective on society, but also to help shape it on the long term, whereby the actual artwork serves as an initiator of societal developments. In the project Invisible Philosophy, for example, the artists used an unconventional change of perspective to document the precarious situation of Chinese migratory workers who eke out a living as day-labourers in Asian cities.

The question of how economic labour systems dictate the value of an individual in society led Baltensperger + Siepert to spend a month as employers, hiring the day-labourers as philosophers. The workers, who would otherwise usually be reduced to purely physical activities, were employed by the artists to write down their own thoughts on life and the environment. The text material penned by the ostensibly “invisible” was published as a book and Baltensperger + Siepert declared it to be a philosophical work.

The two artists are also addressing sociological issues and current social structures in New North Zurich, this time based on the meaning of the “communal” and the “new beginning”. Bells have accompanied social togetherness since the year dot: from the hourly chime to the death knell, through to warnings of danger. Even the smelting and casting of bells has an inherent social element: on the 8th of May 1945, while the peal of bells was heralding the end of the war in most Swiss localities, the residents of many bombarded European towns cast new bells from collectively gathered metal – often to replace the bells that had been melted down at the start of the war for the manufacture of weapons.

As it remains in the ground on the Hunziker site, “the bell” will not be heard, yet the preceding communal act reverberates within it. In the cooperative residential and commercial estate “mehr als wohnen”, where processes of participation play a key role, the buried artwork becomes a memento of a collective experience and a symbol of a shared new beginning. 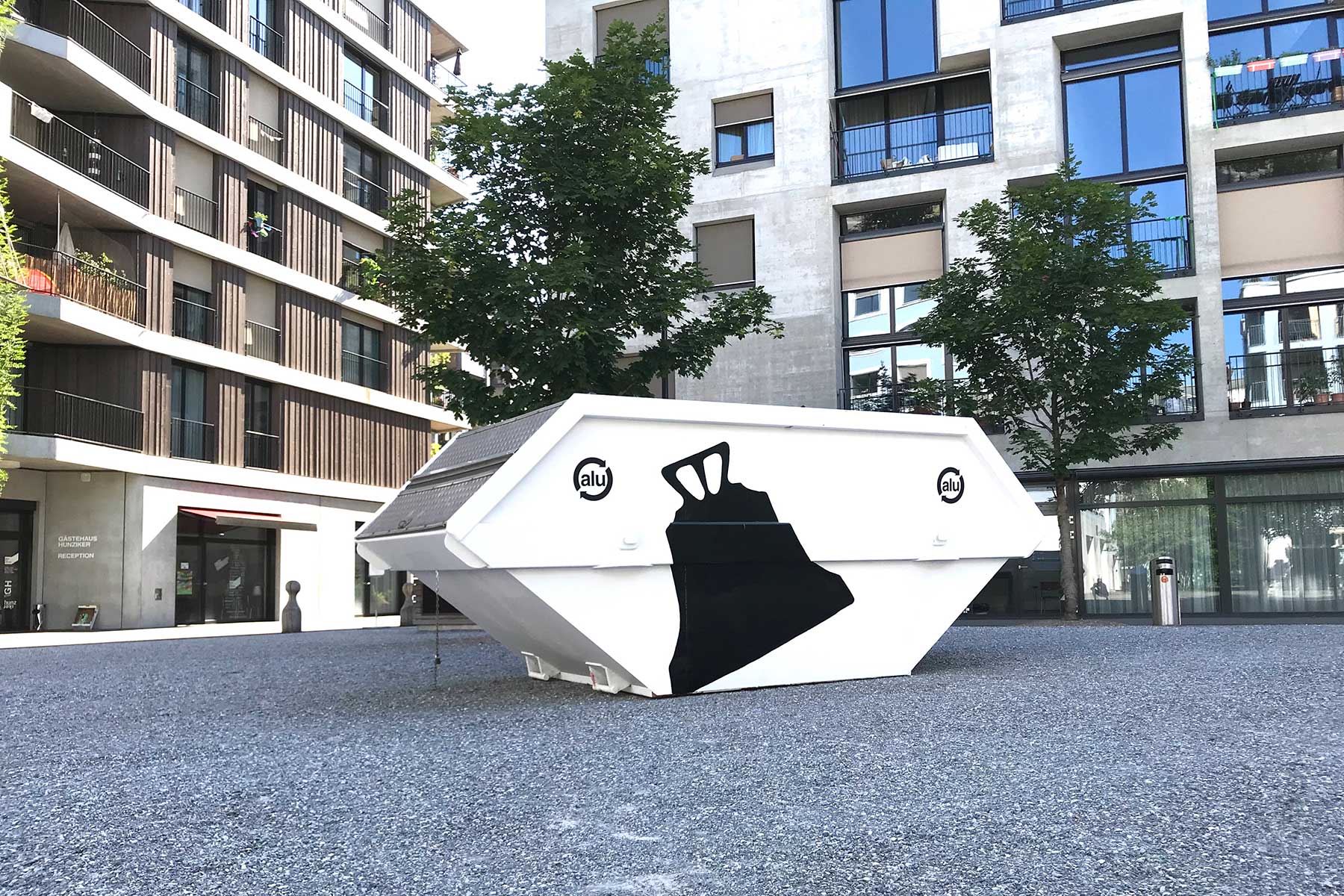 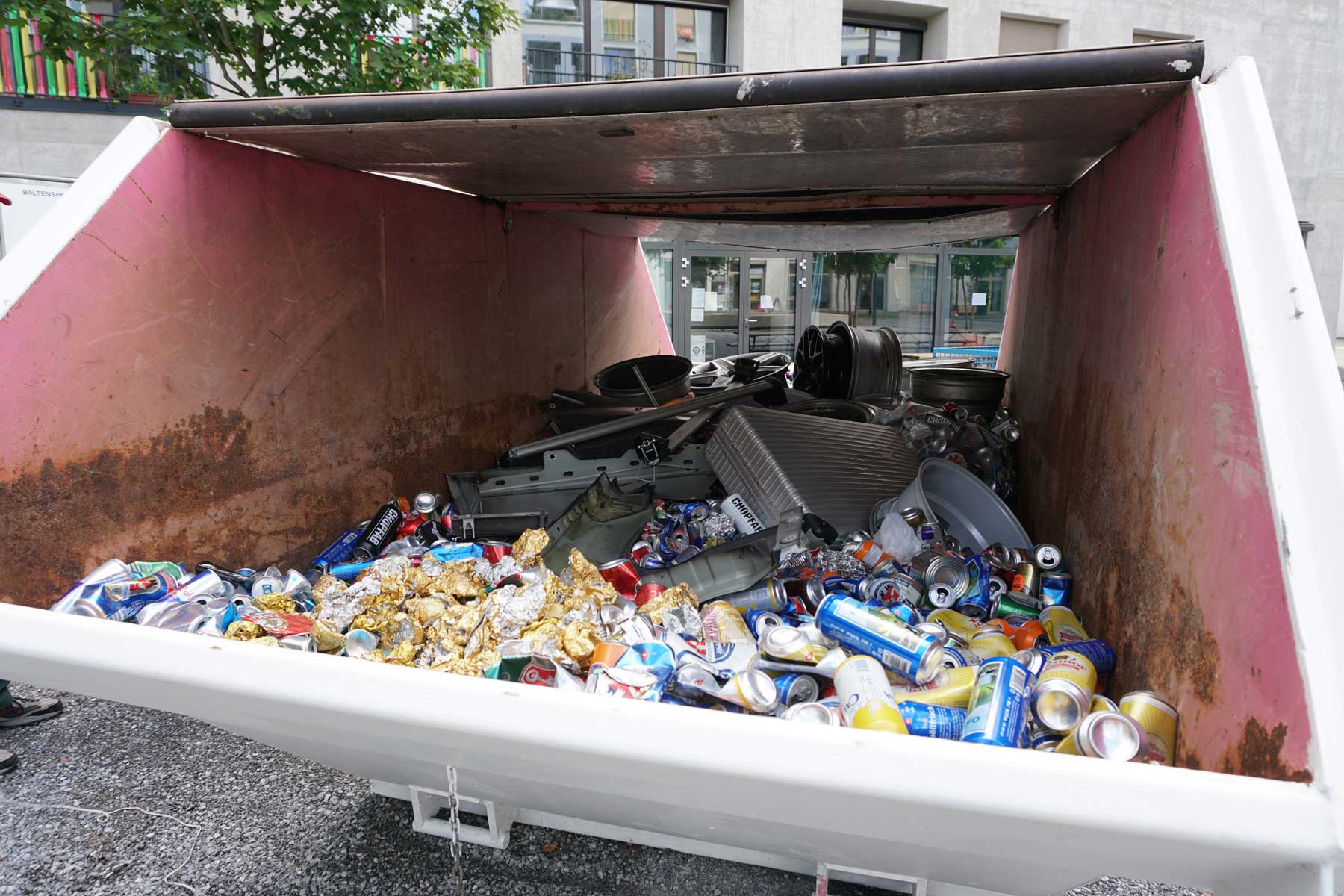 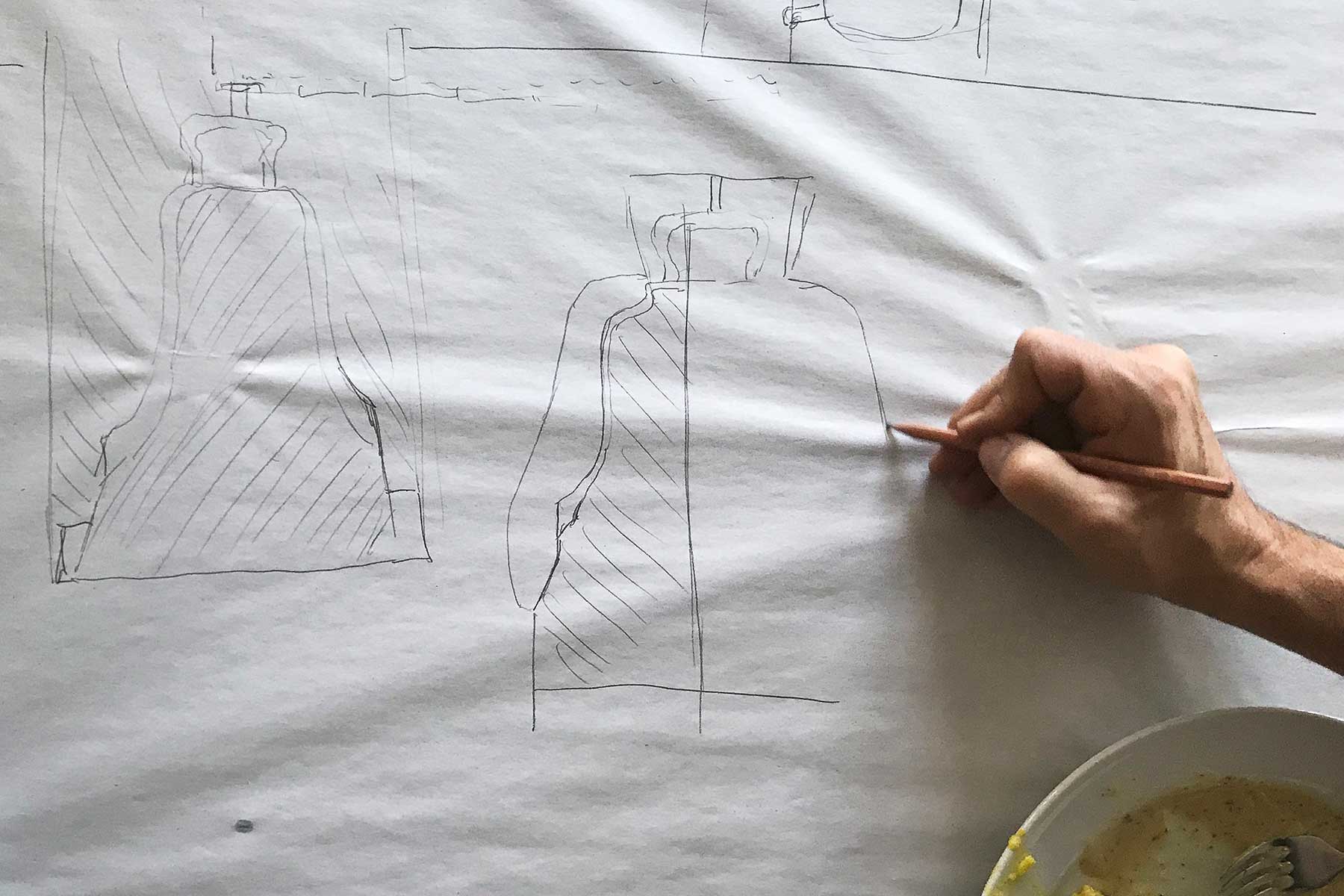 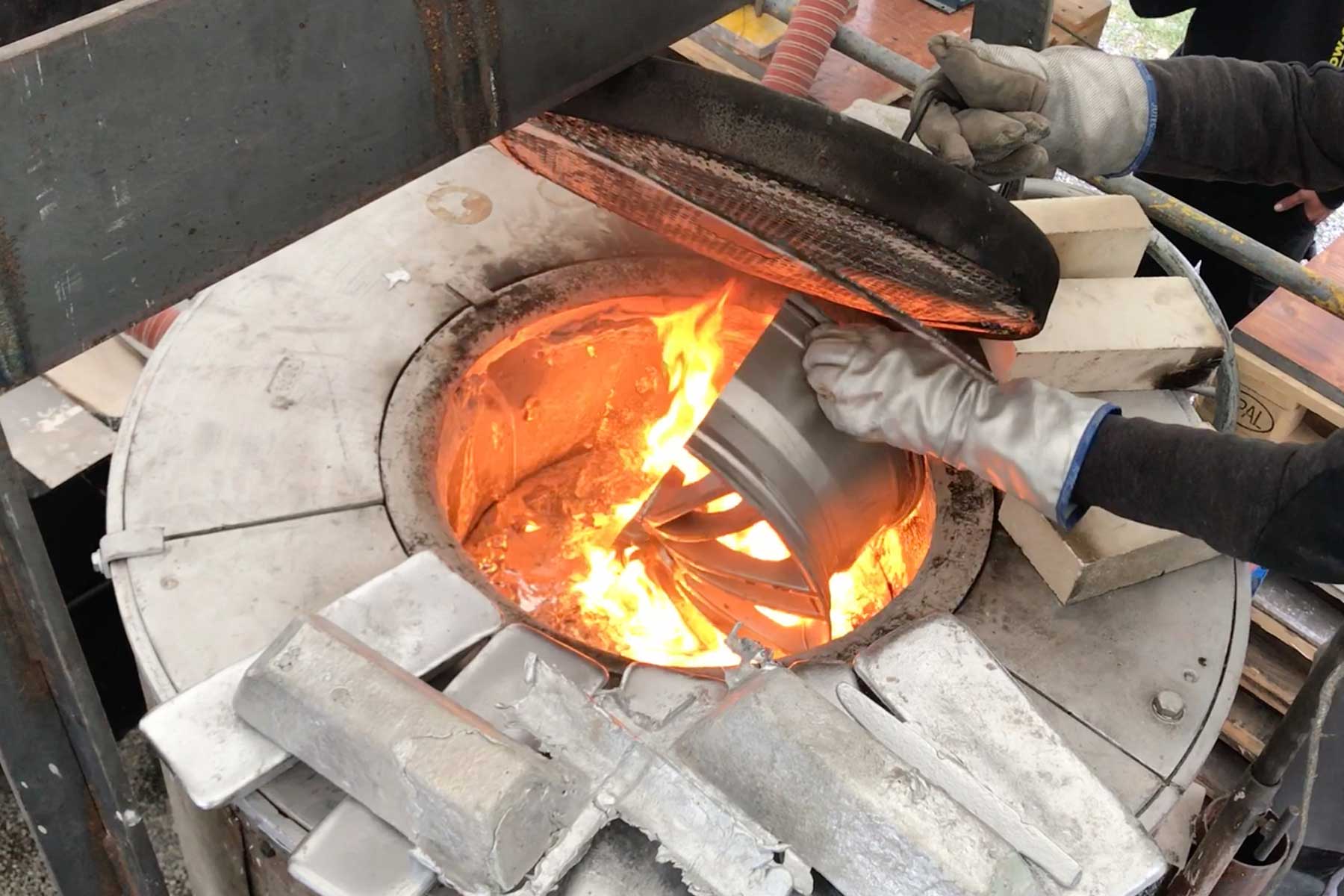 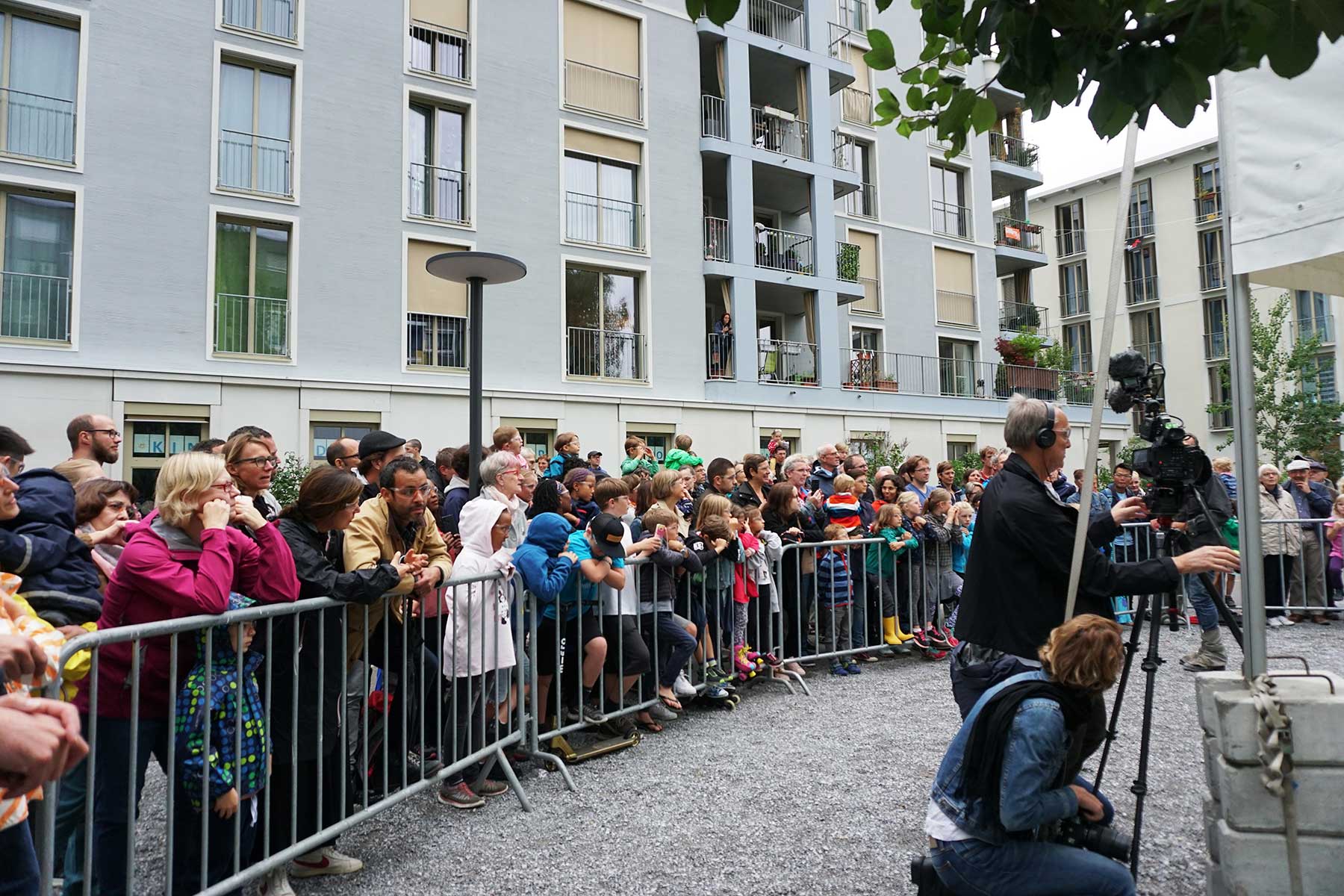 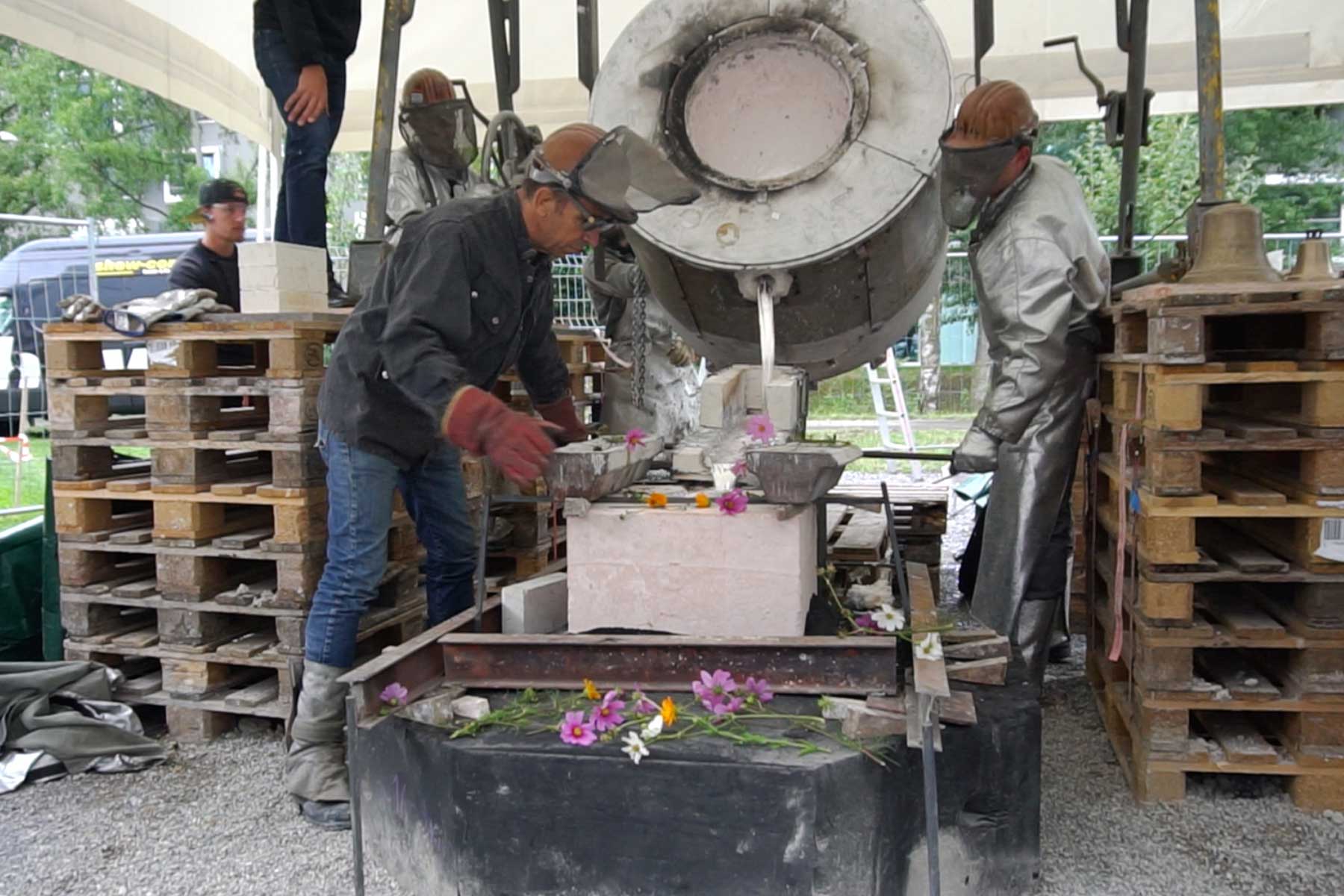 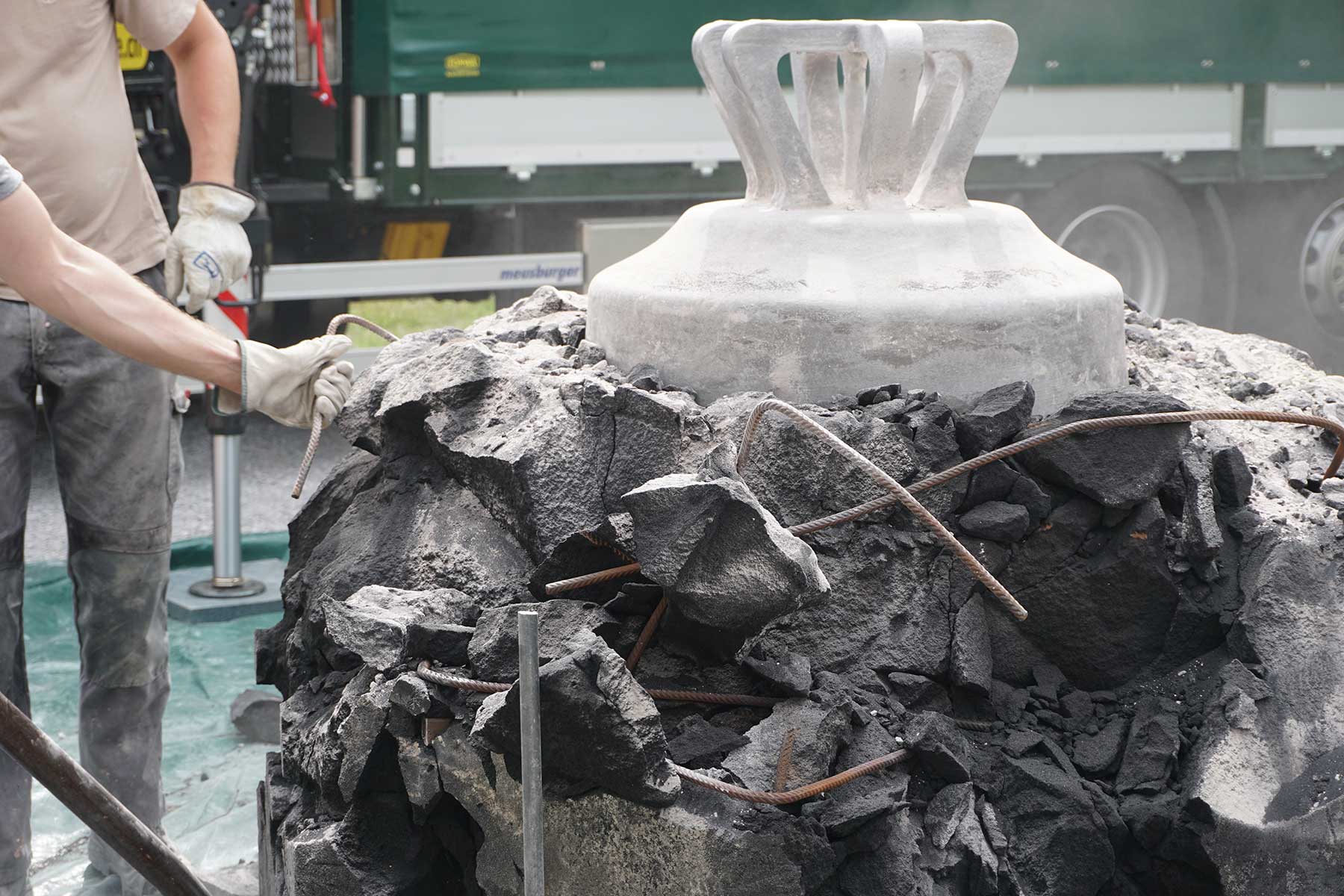 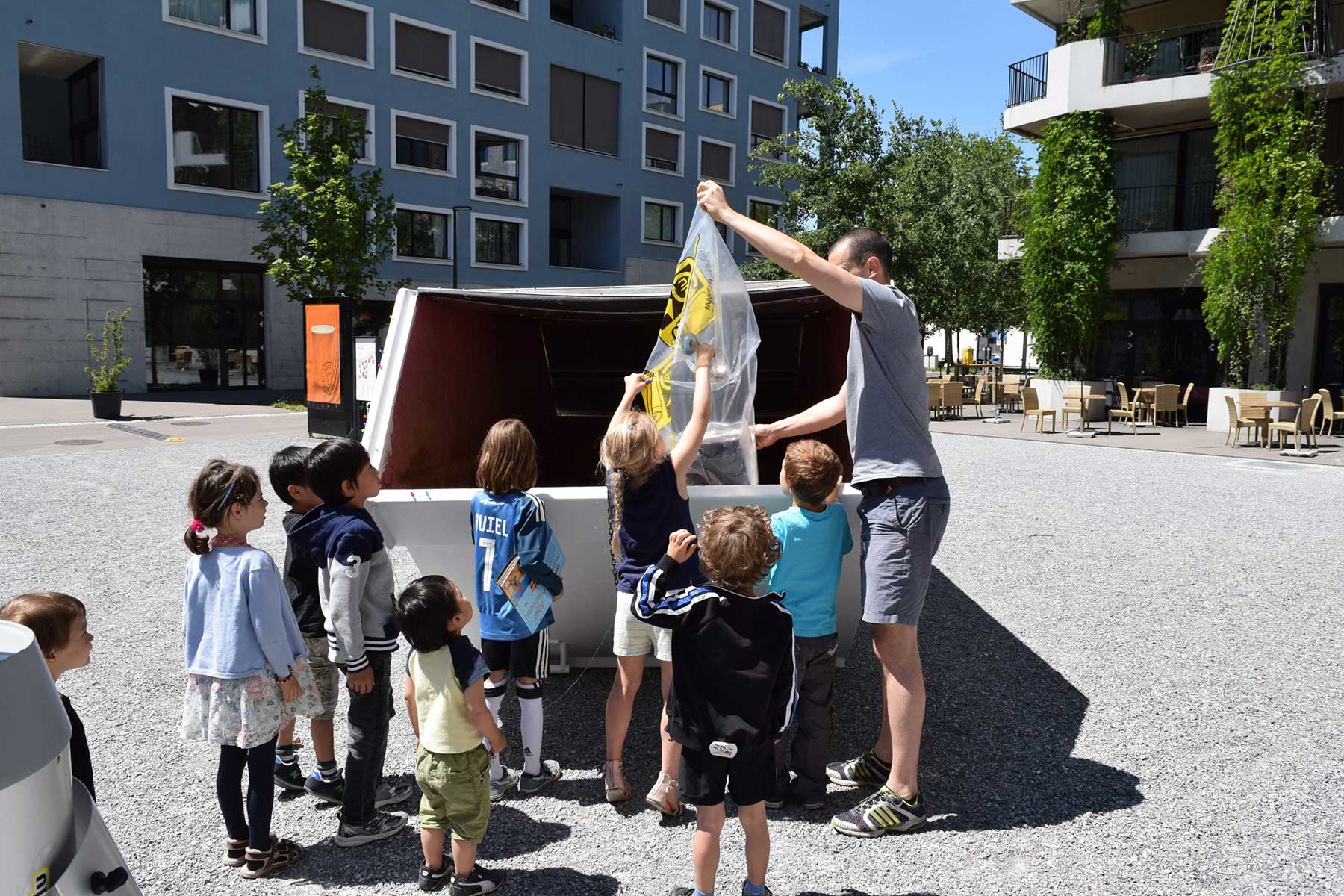 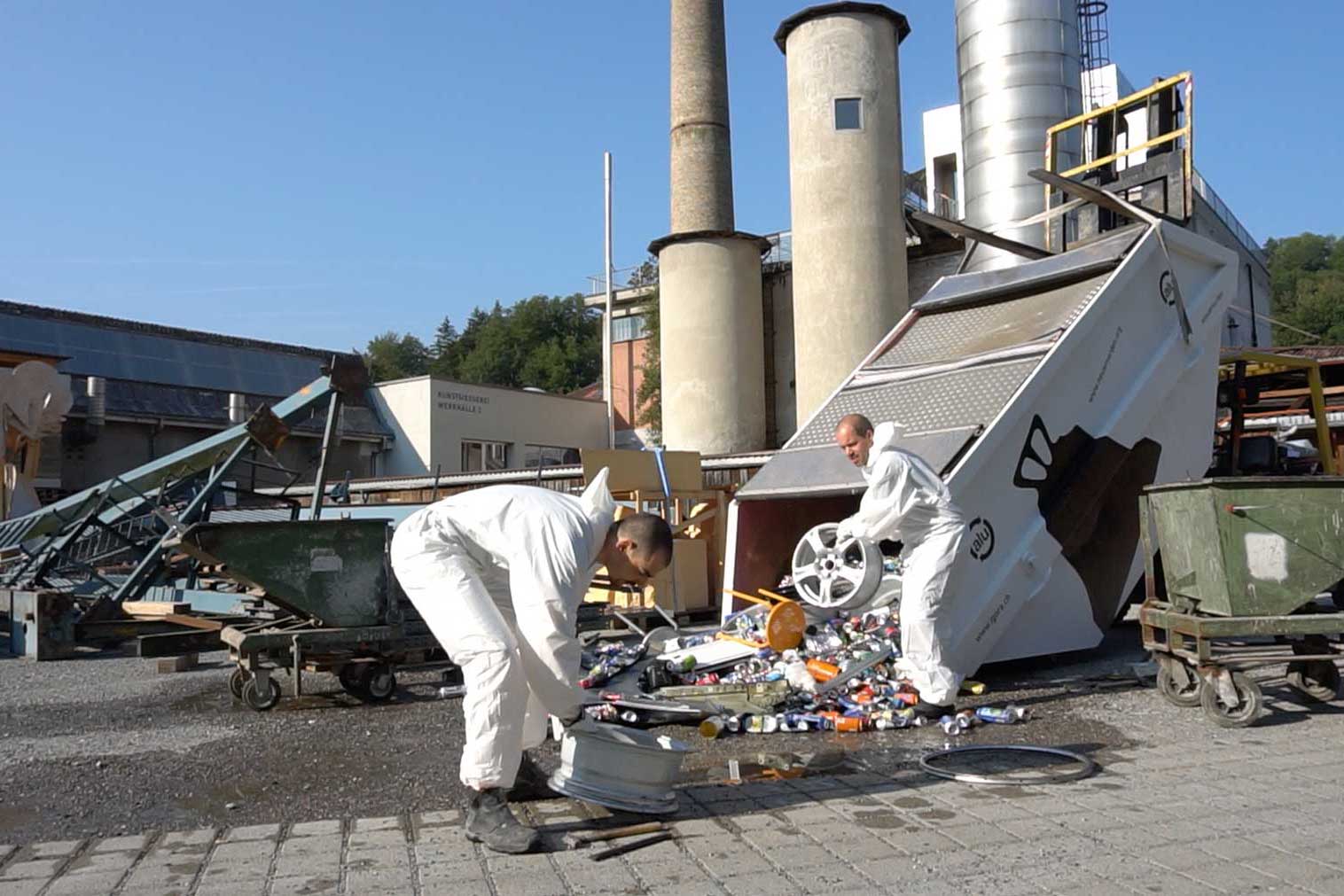 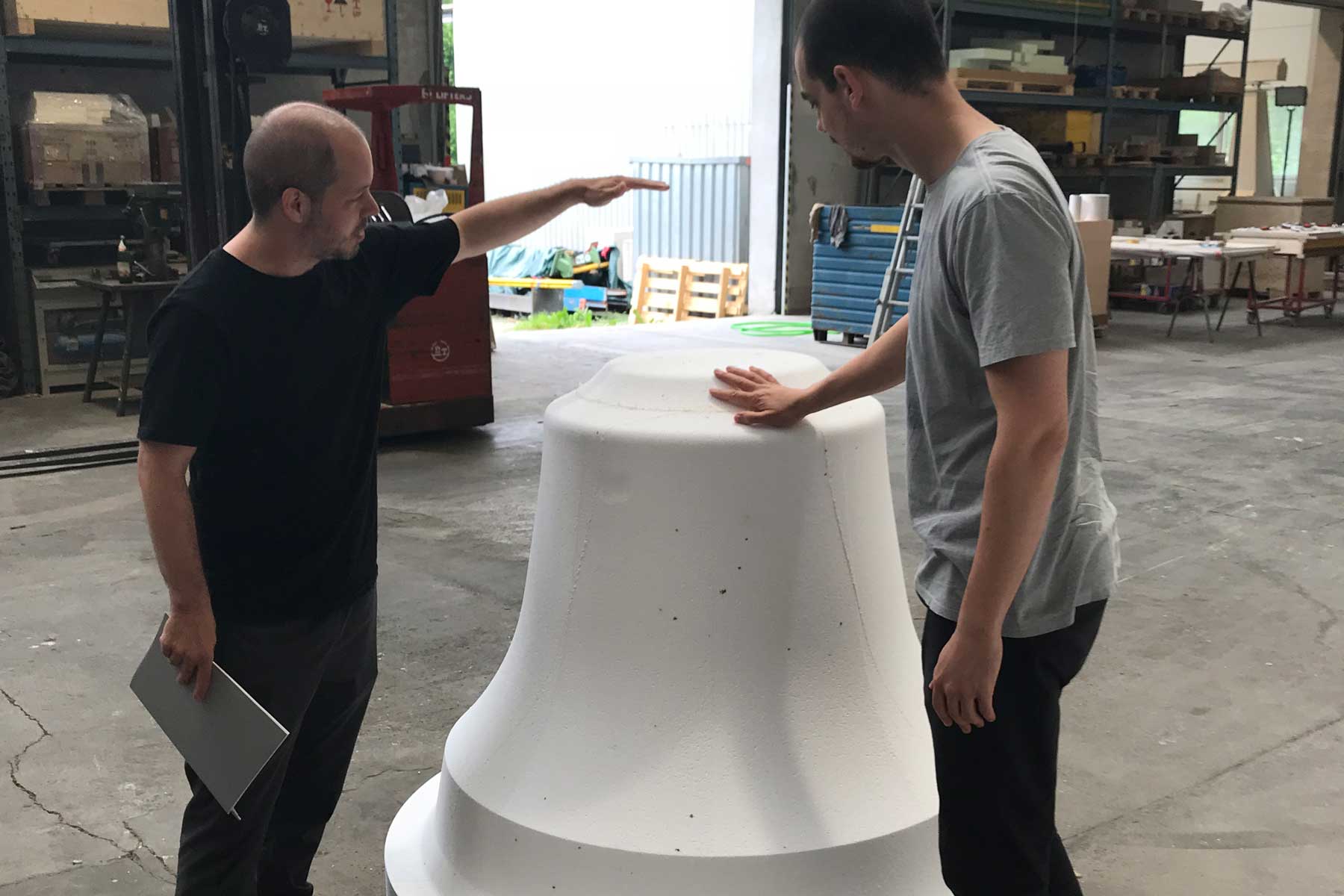 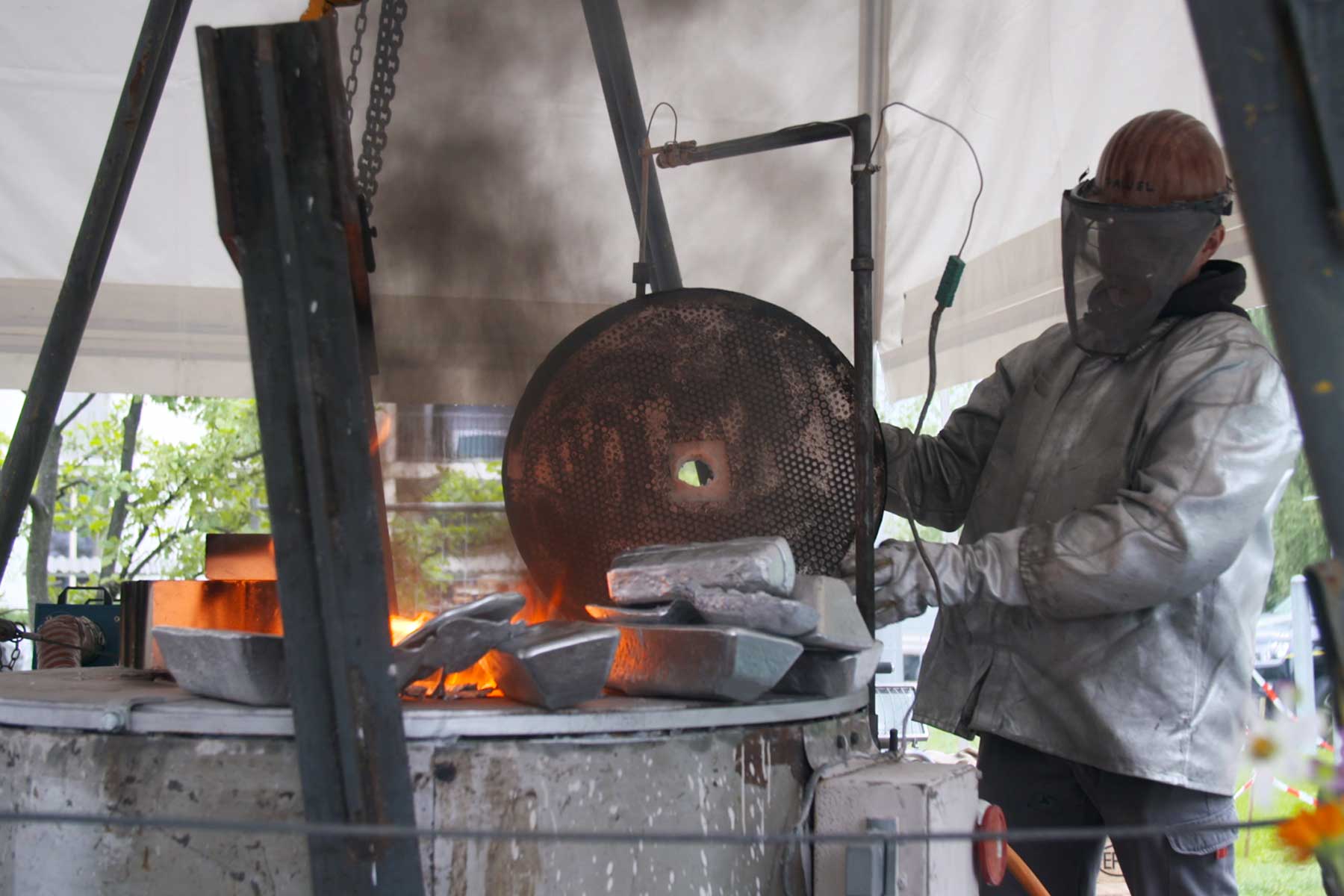 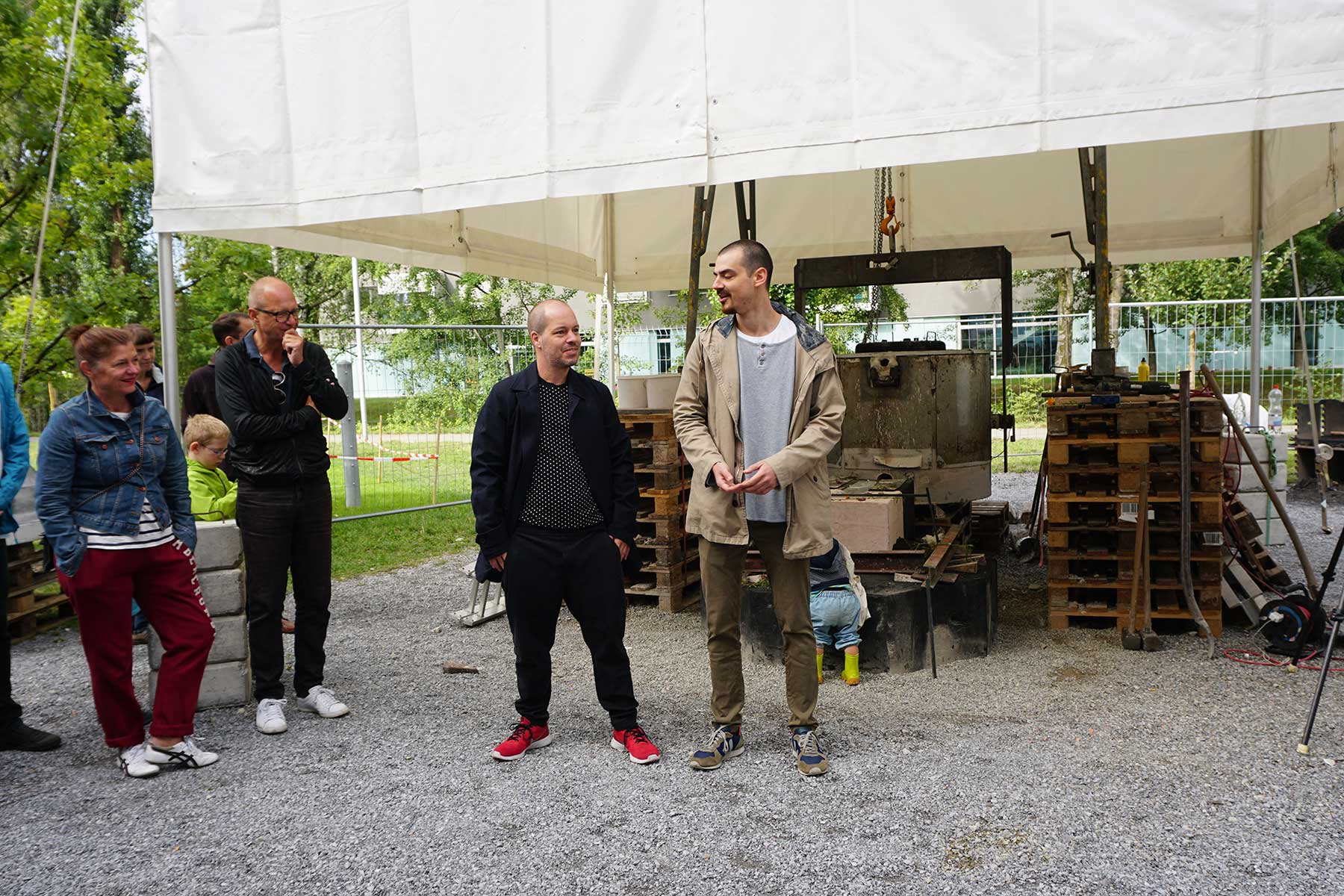 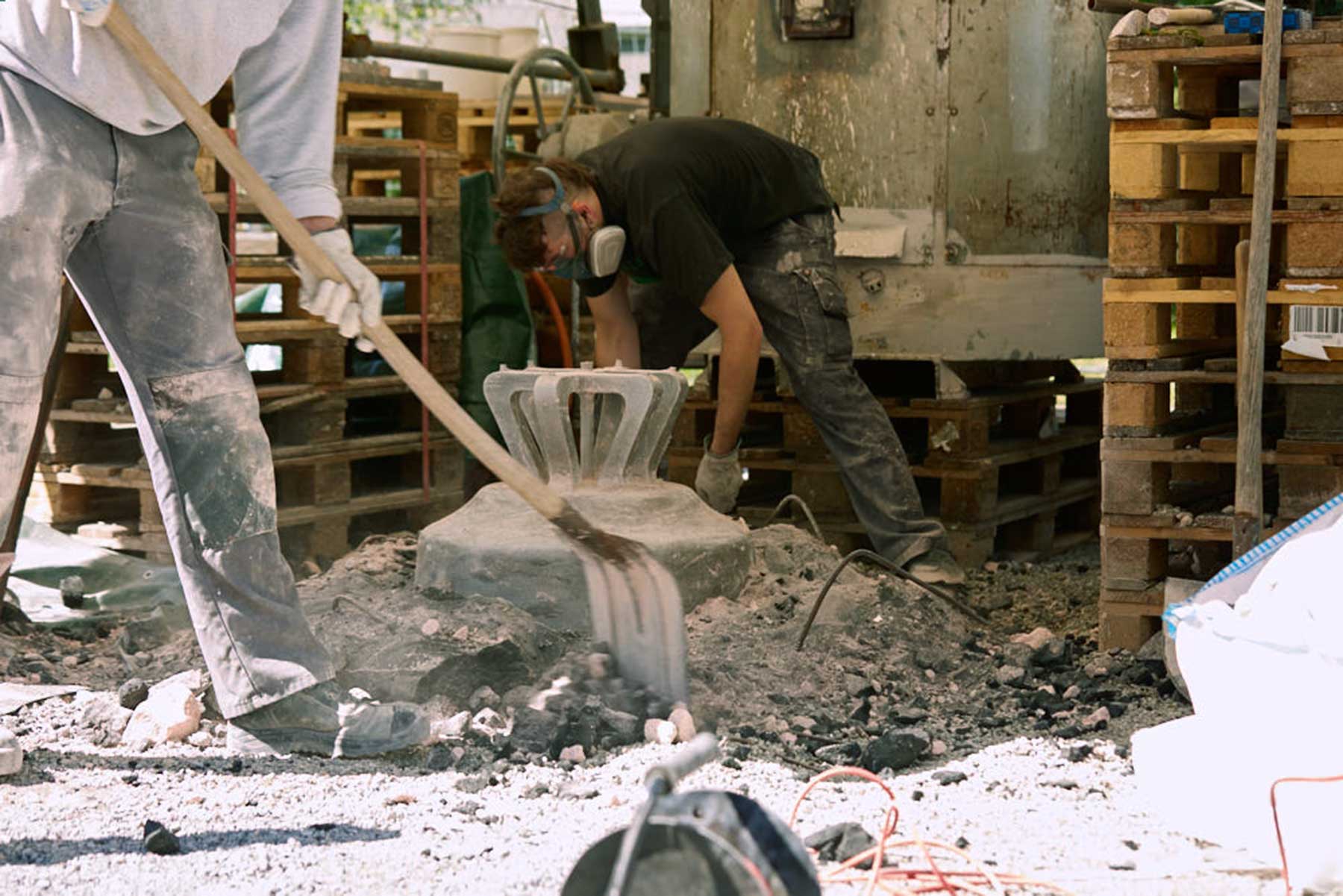 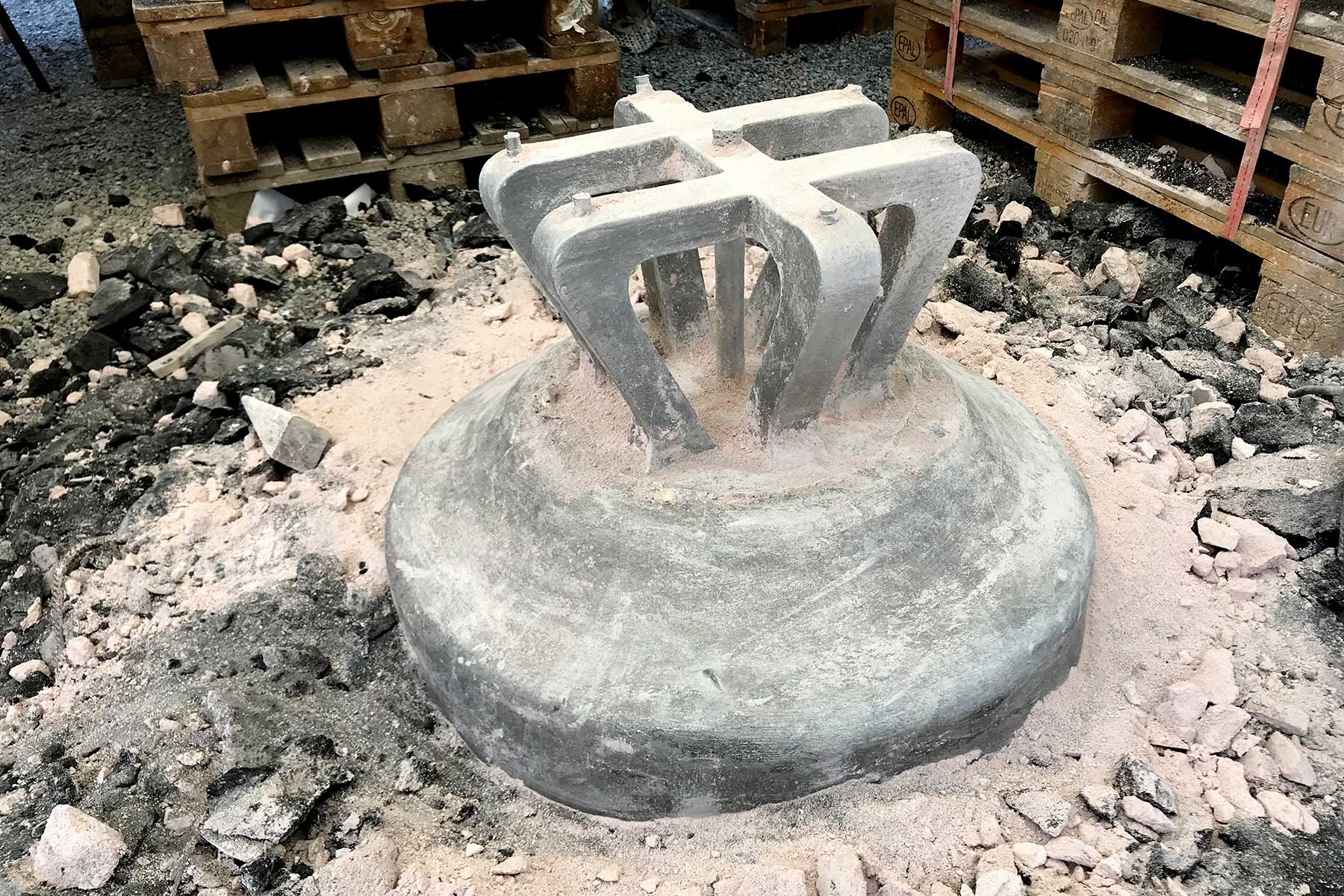 In todays times we still need symbols to feel connected, but we do not need a bell to tell us when to get up and when to get home to eat. The idea of the bell is not driven by religious symbolism. For us the bell is detached from that and stands for an object that has origins in almost all cultures around the world and is a tool to structure and organize society. Hence the bell does not even have to ring. For that reason only the top of the bell is uncovered and gives an idea of what lies underneath. The bell will remain in the ground, right wehre it was cast.

Our idea was to cast the bell on site and have it remain there as a symbol of the common effort, to create a myth of how the bell came to being, that could be told to those who were not there to witness the birth of the bell.

As for the material we decided to use Aluminum. A material that represents our time better than bronze and a material that everybody has at home.